ULAM FRESH FROM THE HERB GARDEN 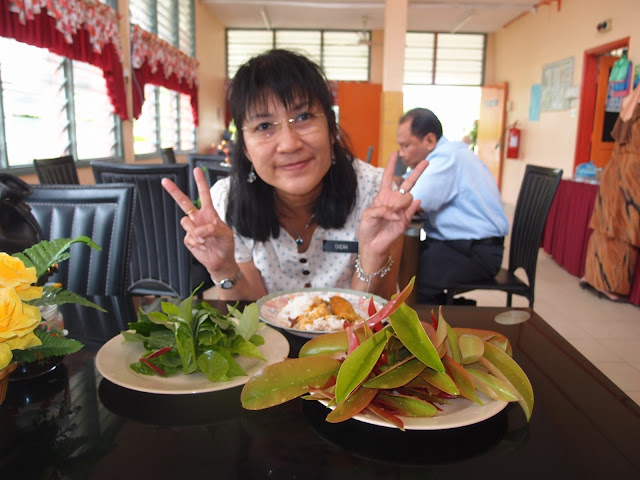 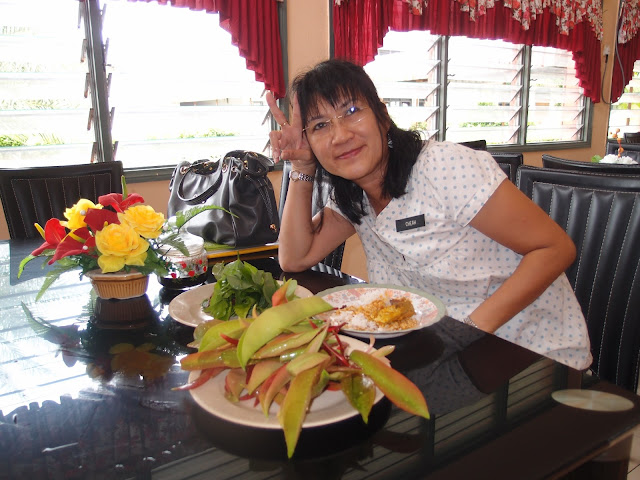 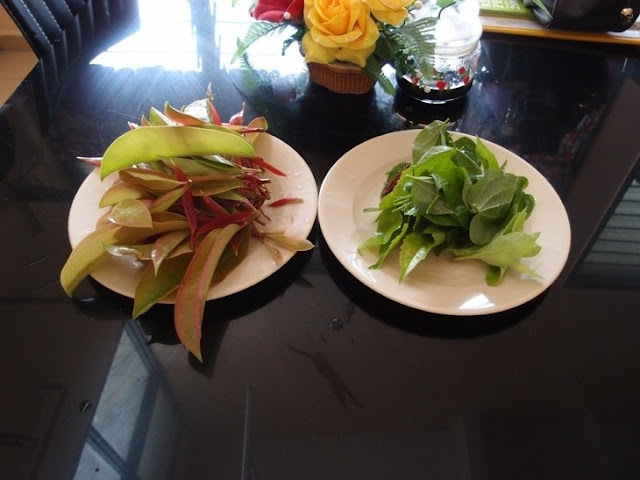 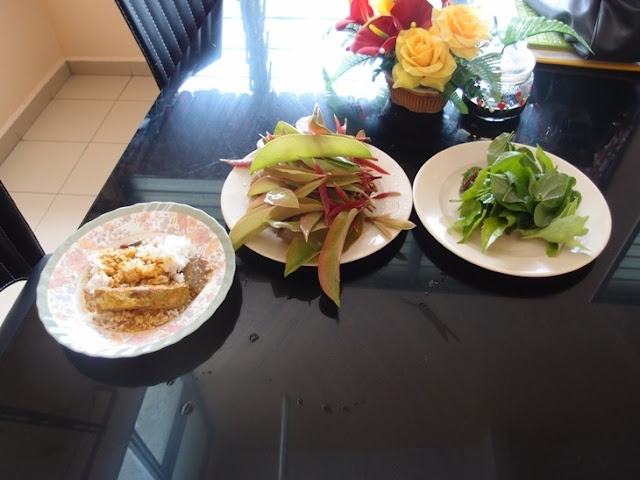 Once in a while, my colleague and I will pluck a few herbs from the Herb Garden and bring them along with us to the college canteen so that we can eat them as Ulam (Salad) together with our lunch.
Yesterday we plucked Kaduk, Sambung Nyawa and Assam Gelugor leaves. We plucked a lot so that other lecturers could also enjoy them.
Hey! Eating ulam is said to help one to maintain youthful looks. So it is worth the while to eat raw vegetables regularly. 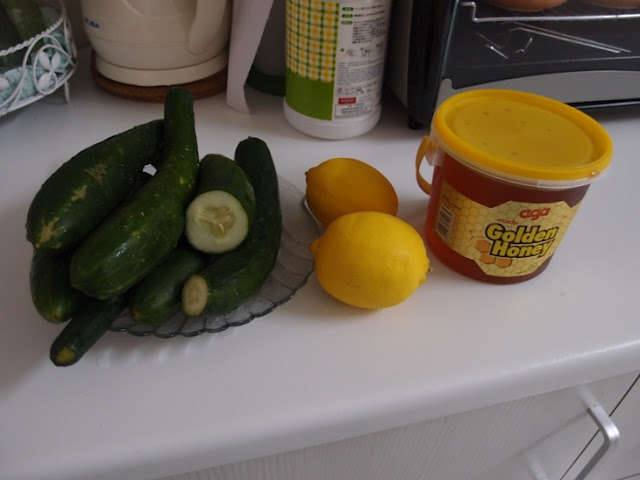 My friend and I bought some cucumbers from the market last weekend as they were cheap. However both of us did not manage to make use of the cucumbers to do any cooking. My friend even gave hers to me. What was I going to do with so many? Then I got an idea. Why not make cucumber juice! So I sprung into action. I washed the cucumbers, took some lemons from the fridge and also my tub of honey. Then I put the cucumber into the blender and pureed them. After that I sieved the puree as I only wanted the juice. Next I added lemon juice and a few tablespoons of honey. 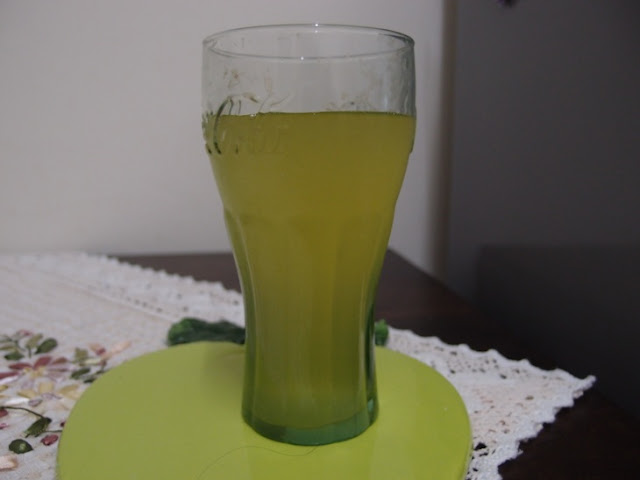 - Pour 2 cups of water into blender. Chop up cucumber and blend until it is pureed.

- Sieve the pureed cucumber and pour the juice into a jug.

- Squeeze in the lemons and add honey, depending on how sweet you want your drink.

- Serve over ice with cucumber slices as garnish.
Posted by Miss Cheah at 12:27 AM 1 comment: 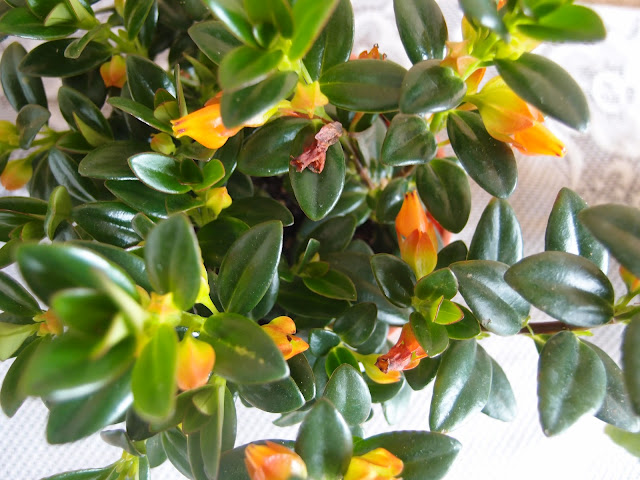 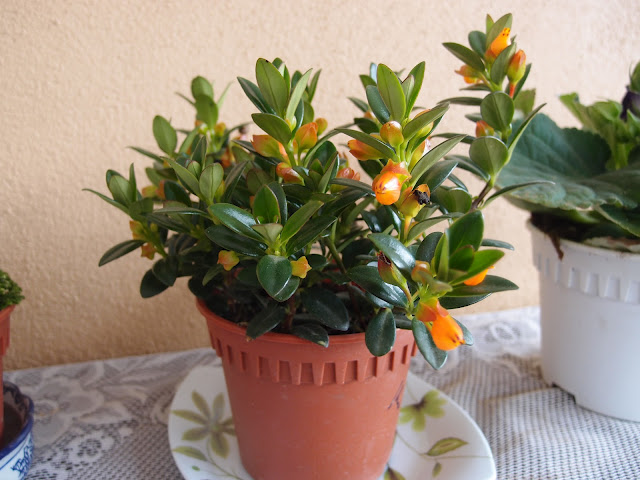 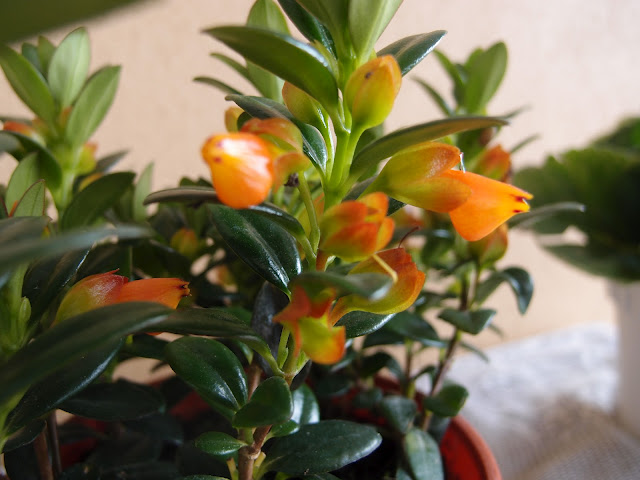 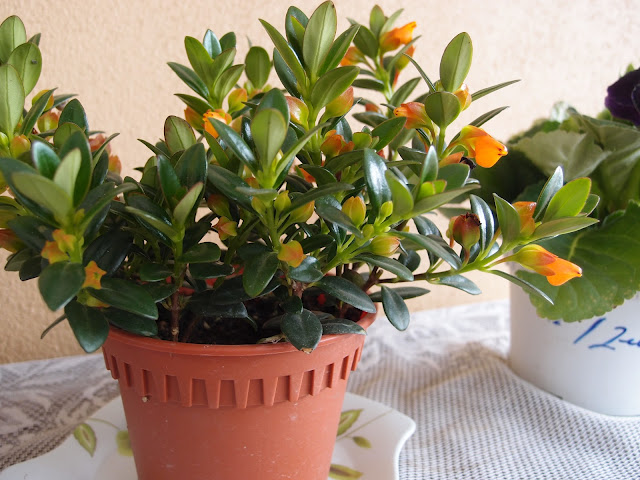 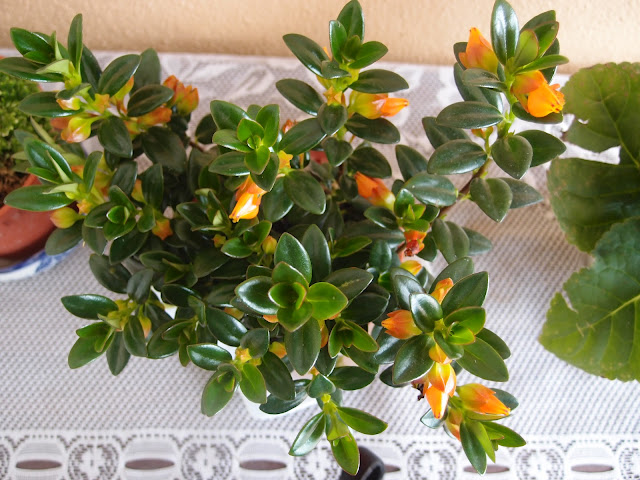 I wanted to make my garden more cheerful and bought a couple of new plants from my regular florist. The Goldfish Plant above is now sitting prettily on my shoe rack. Look closely at the flowers and you will see that they bear a resemblance to goldfish. Hence the name.

These are pictures of my latest acquisition for my garden, the beautiful Gloxinia plant. Gloxinia flowers have the floral meaning of the gentility of love at first sight. So if you receive this flower from someone, it could mean that he or she has fallen in love with you at first sight. In my case, I bought it myself. 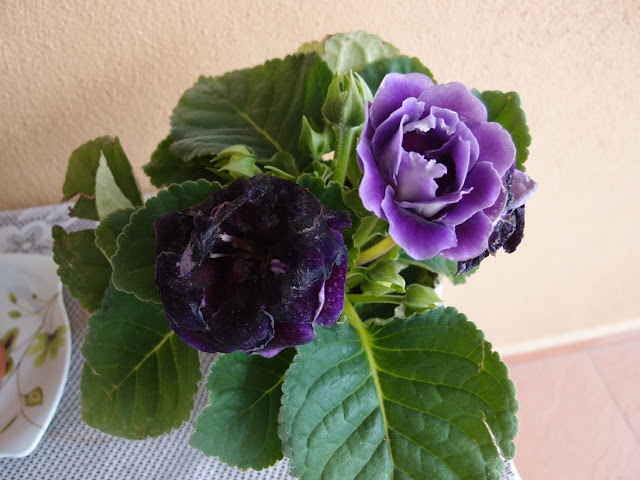 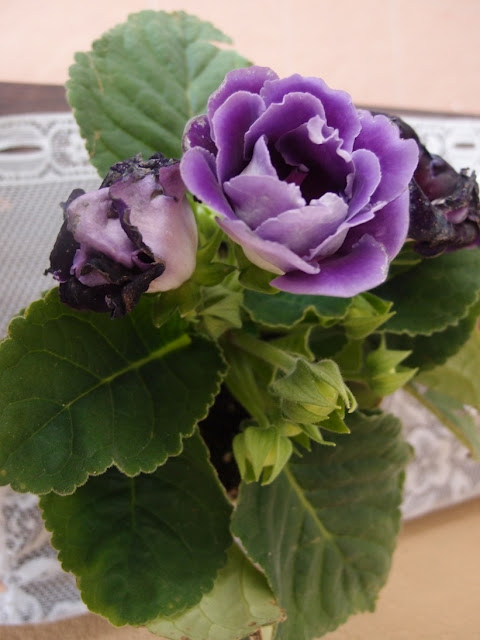 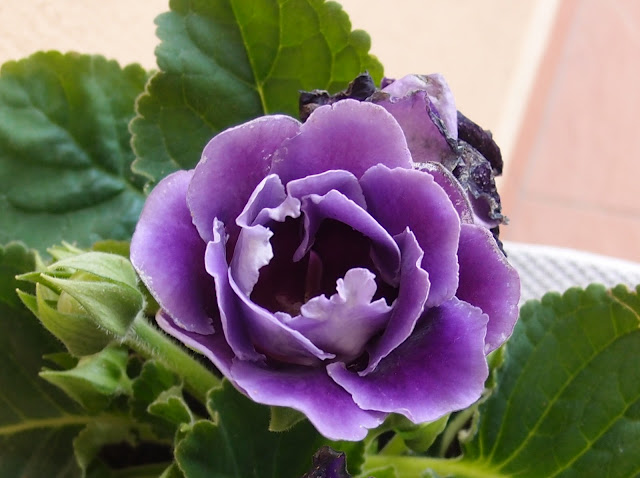 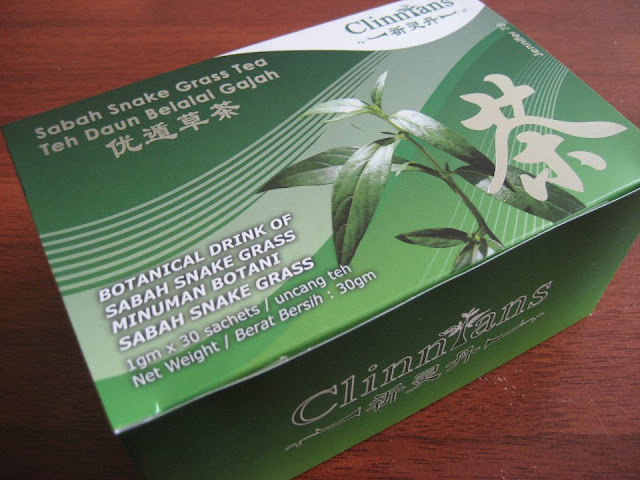 A while back there was all this rage for Sabah Snake Grass. In Chinese traditional medicine, the Sabah Snake Grass (优遁草,Clinacanthus nutans) is used to ease of inflammatory conditions.
Then word got around that it was a miracle cure for cancer.
Here is the story of how the Sabah Snake Grass found fame as a herbal cure for cancer:
In April 2011, the Malaysia Chinese newspaer Kwong Wah Press reported that Mr Liu of Taiping in the state of Perak was diagnosed with stage 4 lymphatic cancer in 2008.
A doctor advised chemotherapy for him. But it cost 50,000 ringgit and there was only 1% chance of survival. Mr Liu turned it down as he planned to use the sum of money for his children’s education.
As he had heard that the Sabah Snake Grass was good for inflammatory treatment, he tried it out.
Initially, he took about 40 leaves and his condition improved. He then increased his intake to 80 leaves.
After about 2 weeks, his condition improved significantly. He revisited the doctor. And the doctor diagnosed him as 96% recovered. The news together with the photo of Mr Liu’s before/after condition convinced many cancer patients in Malaysia to try the Sabah Snake Grass. From then on, Mr Liu himself started to introduce Sabah Snake Grass to others.He claimed that he has saved about 1000 people with the humble Sabah Snake Grass.
LINK
It was because of all the publicity surrounding this plant that I had people contacting me whether I had this plant in the Herb Garden. It was after all the enquiries that I started looking for this plant and thankfully my news vendor got some for me to plant. Now there are only two pots of Sabah Snake Grass in the Herb Garden. Once in a while, I would pluck a few leaves and eat them raw and believe me, they are really bitter.

My friend Annie posted a picture of a processed Sabah Snake Grass which has been made into a drink in my Facebook and I am reproducing the picture here.
For those of you in Malaysia who are interested to get this drink, please click the link below to look for the outlets where you can purchase the drink which comes in a box of 30 sachets.
LINK
https://www.facebook.com/notes/anti-cancer-sabah-snake-grass-clinacanthus-nutans/outlets-to-purchase-ssg-tea-or-fresh-leaves/390278787675993
Posted by Miss Cheah at 11:11 PM 2 comments: 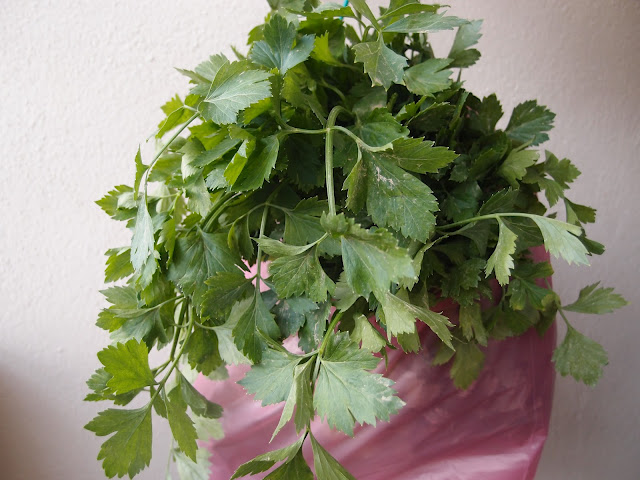 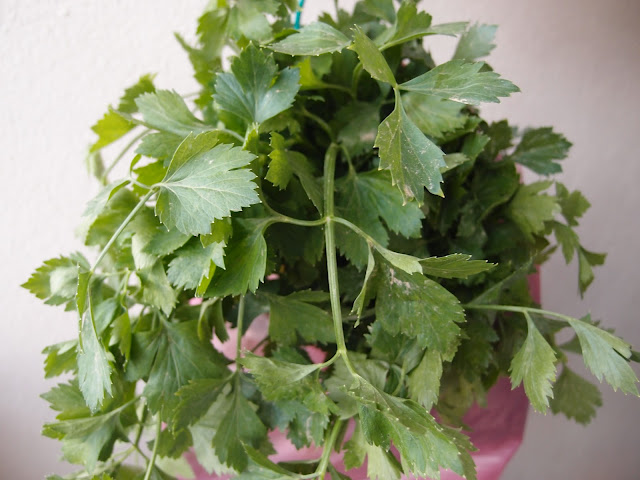 Last weekend, I got 2 big bunches of parsley for the price of RM1. Very cheap, right?
Now the problem was what to do with so much parsley. I couldn't use all of them to make soup. So, I turned to the internet to look for herbal recipes so that I can make pots of the stuff and feed them to my friends and students in the college.
Find two recipes, I did. Both were for detoxifying and cleansing the kidneys. It appears that parsley detoxifies the kidney by flushing toxins out, and is beneficial in the treatment and prevention of kidney stones. This herb contains a compound named Apoil, which has now been isolated and used in medication to treat kidney ailments and kidney stones.

Well everyone, I am sharing the recipes I found with you in this blog.

RECIPE FOR PARSLEY TEA
To make a Parsley tea, place 2 cups of water and 2 tablespoons of chopped parsley into a pot with the lid on. Heat the water to almost boiling, then turn off the heat. Let it sit for fifteen minutes, then strain the parsley out and enjoy the tea.

RECIPE FOR KIDNEY CLEANSER JUICE
Just throw all the ingredients together in the juicer, then drink! You can also use a blender if you want it to be more like a smoothie. 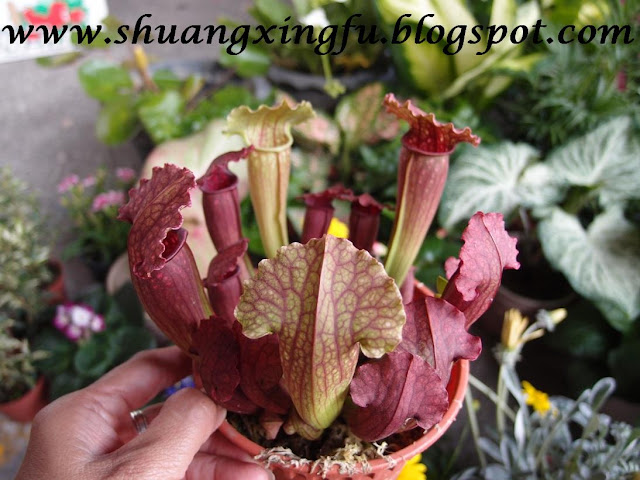 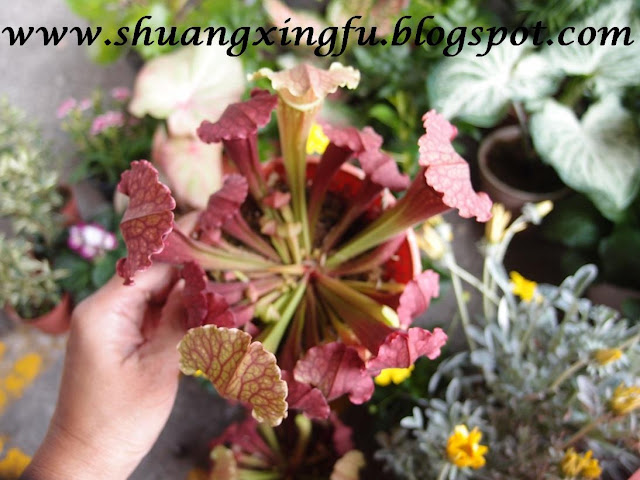 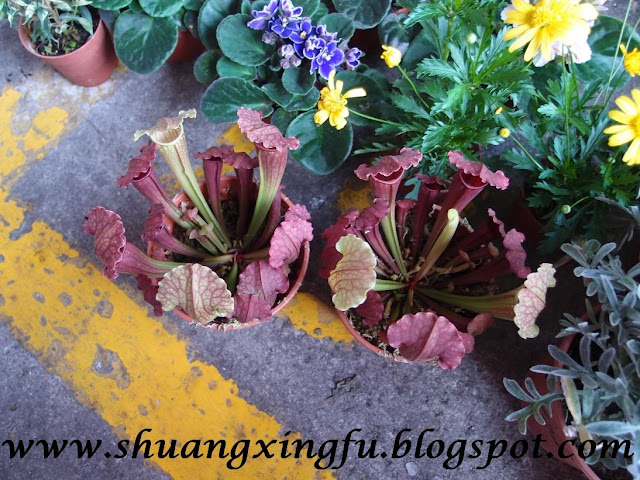 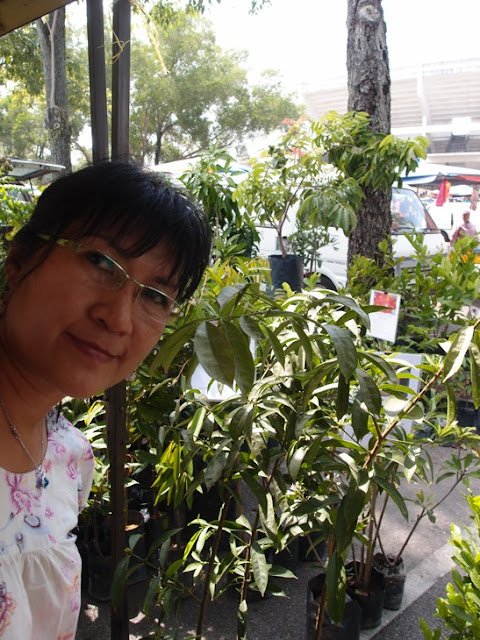 Last weekend I went to the Farmer's Market in Ipoh to look for a Mahkota Dewa (God's Crown) plant. It was to replace the one that was planted by the former principal, Puan Siti Arfah bt Ibrahim, a couple years ago. I managed to buy one at RM30. Two years ago, I paid about RM90 for a plant but since then the price had gone down. 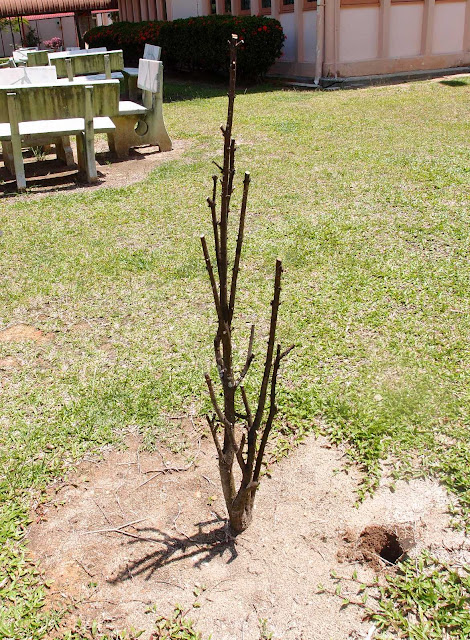 This is the dead Mahkota Dewa plant in front of the library. Now this is how it looks like. Tried I did to save it but was not successful. 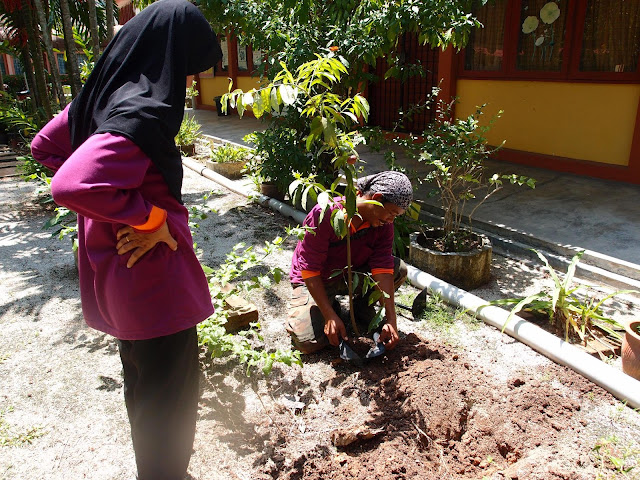 I got help from one of the gardeners, Encik Ismail, in the school to help me plant the Mahkota Dewa in the Herb Garden. The location for the plant was changed as my colleague and I figured that it was not too suitable for this particular plant. 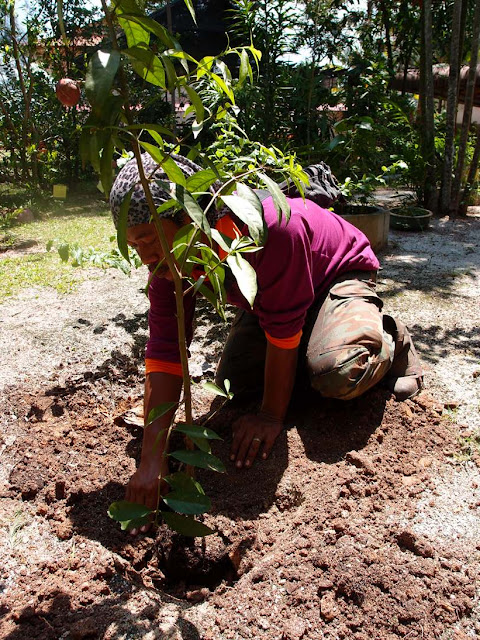 Encik Ismail planting the Mahkota Dewa in the Herb Garden. 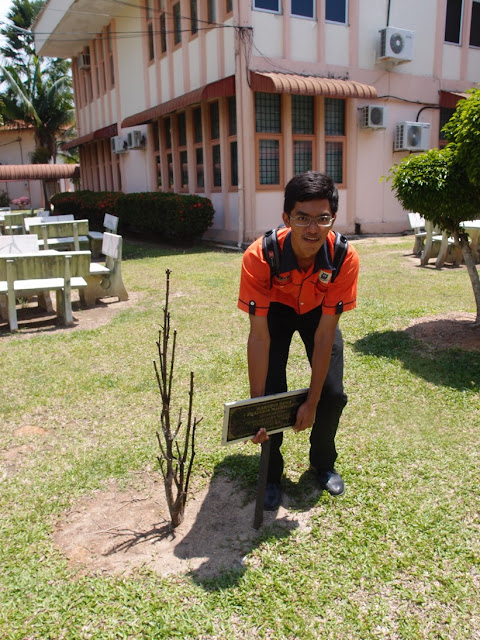 After Encik Ismail had done the planting, I got my student Vasan to remove the signage for the plant from the old spot. 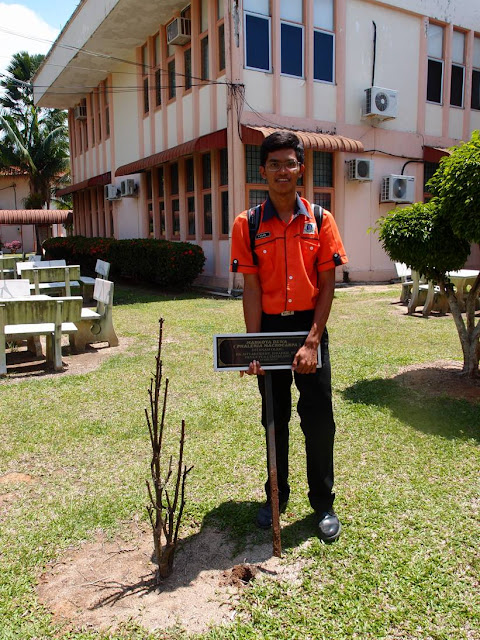 You can see Vasan with the signage that he had pulled out from the old spot. 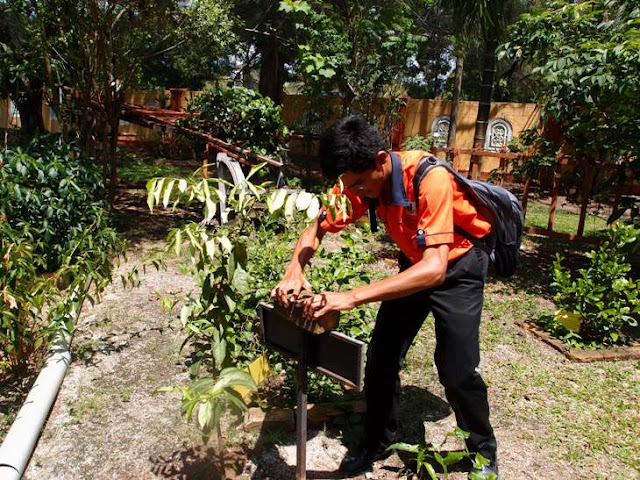 Vasan then helped me to place the signage at the new spot. 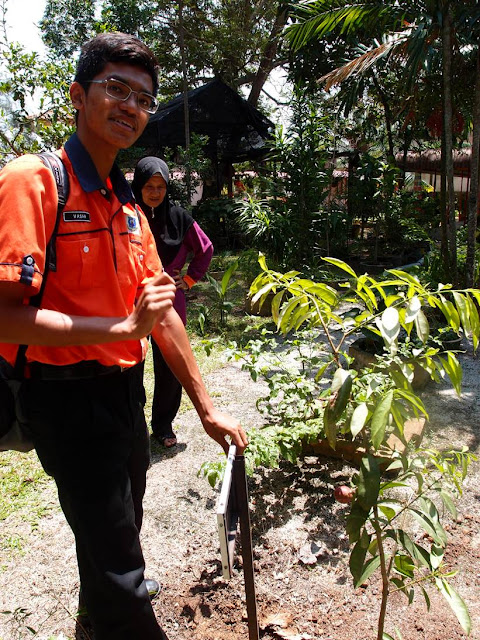 Please note that the mention of the medicinal uses of any herbs in this blog is provided for interest and educational purposes only. It is not intended as a substitute for professional advice of any kind. Always consult a medical practitioner before using herbs for any serious medical problems.

Search this blog for herb info

HERBS IN THIS BLOG 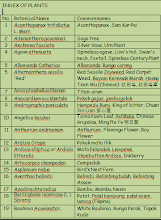 From a young age, it had been drilled into me that herbs can be used to cure a myriad of illnesses. I have been taught how to use herbs to treat a lot of ailments, from boiling the herbs to using them as ointment. Hence, I thought I would do a blog on the herbs to share what I know and have learnt about the use of herbs for our wellbeing. Do support me by visiting this blog frequently.
For your information, quite a number of the herbs that I am posting here can be found in the Herb Garden of my school, Sekolah Menengah Vokasional Seri Manjung.
MALAY TRANSLATION
Semenjak kecil, saya telah diajar bahawa herba boleh digunakan untuk mengubati pelbagai jenis penyakit. Saya belajar untuk menggunakan herba untuk mengubati penyakit dengan pelbagai cara, seperti merebus herba dan menyapu dengan minyak yang diperbuat daripada herba. Oleh kerana itu, saya memulakan blog ini untuk berkongsi pengetahuan tentang herba untuk kesihatan dengan semua pelawat blog ini. Saya amat berharap para pelawat dapat sering kunjungi blog ini.
Untuk makluman para pelawat blog, sebilangan herba yang dicatat di sini ditanam di Taman Herba Sekolah Menengah Vokasional Seri Manjung.

The creator of the Taman Herba Vokasma blog shall not be liable for any loss or damage caused by the usage of any information obtained from this blog. She is also not responsible for the contents of any off-site information referenced.